The Samsung Galaxy A04s can be found on GeekBench and you can easily see some of its key features. This list shows that the new smartphone will get power from the Exynos 850 main chip. This device also seems to run on Android 12 by default. It turns out, this smartphone will replace the Galaxy A03 that will be launched in 2021.

When you look at this list, you will find Galaxy A04s with model number SM-A047F. This device has eight Exynos 850 cores with 2 GHz ARM Cortex-A55 cores. Note that this smartphone has an ARM Mali-G52 MP1 GPU and is available on the model with 3GB RAM. However, Samsung is expected to offer the new device in at least two different models with internal storage and RAM. The new Samsung phone has Android 12 based One UI 4.0 user interface. 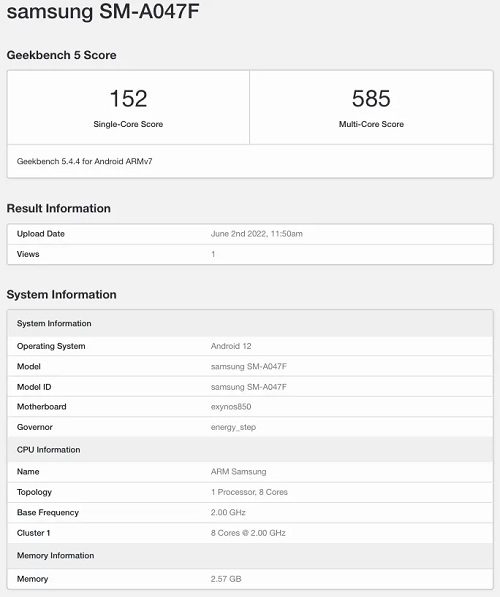 The Samsung Galaxy A04s scored 152 points on the single-core test and 585 points on the multi-core test. Apart from this, no official or definite information about the new Samsung phone has been released yet.

Samsung Galaxy A03s officially launched in August 2021. The device is equipped with a 6.5-inch TFT LCD display with a resolution of 720 x 1600 pixels. You will see the Samsung phone in black, white and blue. As you know, this device supports two SIM cards simultaneously and is available in 3 and 4 GB RAM with 32 and 64 GB internal storage. Of course, storage memory can be augmented by micro SD. The device is powered by a flagship MediaTek Helio P35 processor and is powered by a 5000 mAh battery. Of course, this device comes with 15W fast charging technology and can reduce the recharging time to an acceptable level.

The smartphone has three cameras on the back, which include a 13MP main sensor, a 2MP macro sensor and a 2MP depth sensor. On the front there is a 5 megapixel sensor for taking selfies and making video calls.