Artist Iman al-Assi has threatened to seek legal redress after the release of Shaheen’s “I am Tamam” promotional song for “Force”.

Iman al-Assi, through the Stories feature of the Instagram processor, posted a picture of a page impersonating himself on the Facebook site, and one writer commented: “This is not my page, this song is not mine, thank you.”

Then she wrote: This page is designed to take advantage of my name and make people profit by lying. This song is not mine, nor is it my voice that I recorded with the company and the artist. I do not know who founded it. Sound in the video .. 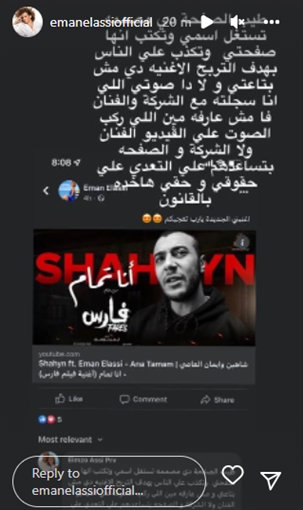 Shaheen has released the song for the movie “Force” titled “Ana Dhammam” which is set to release in theaters on May 18.

I’m sorry for you … the story of an 8 year old video that caused Saad al-Zakir and Ahmed Saad to launch the “Twitter” trend.

Ali Robbie: I offer a job that suits the whole family, and the competition with Helmi and El-Sakka made me happy (video)

7 conditions for entering the Kairoki concert in Z Park .. The doors are closed on this date

See also  A brilliant way .. A bride buys her wedding dress for $ 3