Indian actor Siddharth Shukla has died at the age of 40 due to a severe seizure.

Sources told the Indian media that Siddharth Shukla suffered a severe heart attack in the morning. “He was taken to the hospital some time ago,” a senior Cooper hospital official told PTI.

Many of the pioneers of the social networking site Twitter expressed shock over Siddharth’s death, especially since he had a strong physique, and some tweeters suggested that he had died after being vaccinated against the corona virus.

Bollywood actress Kiara Advani has expressed her grief: “My heart is broken, keep calm, my condolences to his family and loved ones.”

As Indian artist and producer Ajay Devgan said: “If a young man like Siddharth dies suddenly, we will definitely mourn his departure from us. Deep condolences to his family.”

Artist Manoj Bajpayee said, “God! It is so traumatic that words fail to describe the shock and loss that his relatives and loved ones can feel. I hope he stays calm.”

Comedian Sunil Grover tweeted: “I am shocked and saddened to know what happened to Siddharth Shukla. He passed away. My prayers for him, may he rest in peace. And my deepest condolences to the loved ones of the late Siddharth Shukla. Horror and sad news.” 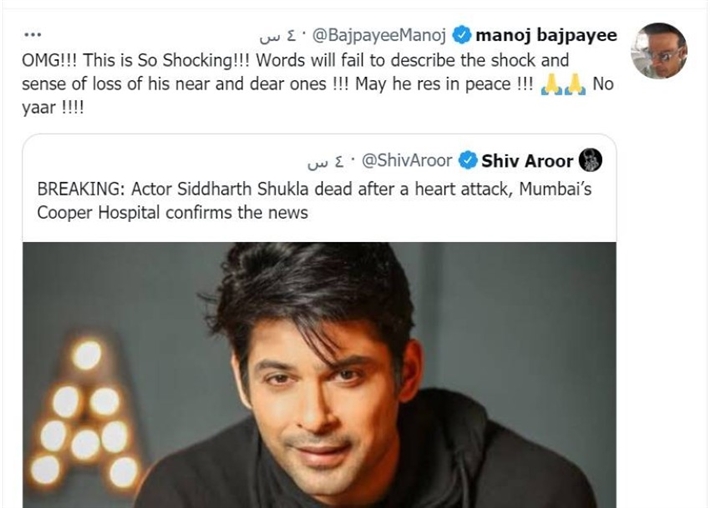 Siddharth Shukla was born on December 12, 1980 in Mumbai. She won the Best Model competition in Turkey in 2005, and became the first Indian to win the title by beating 40 other competitors, appearing in several commercials for some popular brands.

Siddharth Shukla made his TV debut in 2008 with Babul Ka Aangan Sooty Naal and made his Bollywood debut in 2014 with a supporting role in the film Humpty Sharma Ki Dulhania.

Siddharth is best known for his role in the popular TV series Balika Vadu, and has appeared in a number of shows such as “Jalak Dikla Ja Season 6 – India’s Got Talent – Kathron Ke Khiladi 7 – Big Boss 13 – Big Boss 14”.

Shukla Big Boss and Fear Factor: Kathron Kay Kladi had the biggest hit of the season when he won.

Don’t miss to see it

#Fashion_police: The “professor” behind the scenes filming the “La Casa de Babel” ad is elegant with a balanced look .. Find out its price

Yasmin Sabri, the only Egyptian at the start of the Venice Festival .. Look at her red appearance