Elaf from London: The Ministry of Health has announced measures to deal with the increase in epidemics in Iraq and the severe deaths due to hemorrhagic fever and the spread of the disease from the south to the north of the country and to allocate isolated wards in hospitals.
With the announcement that the number of cases of the dangerous disease has exceeded twenty-four injuries and four deaths and that it is spreading to the north of the country, the Iraqi Ministry of Health has taken drastic measures to deal with it, especially with the shortage of medicine. It should be treated as it only protects against it and prevents its spread.

In a circular sent to its hospitals across the country, Elaf reviewed that the Ministry of Health had ordered specially isolated wards to allocate specially isolated wards with their equipment and life-saving drugs and to appoint a medical and health angel. Supported the work in these corridors.
The Ministry stressed the need to adhere to the conditions for hygiene prevention from infectious diseases and to provide personal protective equipment when preventing entry into those halls, in addition to the staff assigned to work in them.
In the governorates in the south of the country, the Ministry organized awareness campaigns targeting butcher shops in the markets and emphasizing the need to adhere to preventive measures and to wear recommended preventive medical equipment to prevent diseases. For the need for an official holiday for their stores.

See also  Without Diet..The most powerful slimming drink for stomach, buttocks and side areas will reduce 10 kg weight in 3 days and turn it into a body burning machine.

Spread of the disease to the northern part of the country

Today, Sunday, it was announced that a case of hemorrhagic fever has been registered in the northern province of Kirkuk.
The province’s official spokesman Marwan al-Ani said in a statement that Kirkuk Governor Raghan Saeed al-Juburi discussed the efforts of several authorities to prevent the spread of the disease and the steps to be taken to combat the disease. .

Infections are on the rise
In addition, the Ministry of Health today announced that the number of cases has risen to 24 since the outbreak was reported in the country last week.
Director General of Public Health, Ministry of Health, Dr. Riyadh al-Hilfi pointed out that the number of victims of hemorrhagic fever is still rising and has reached 24 cases so far. “There are three measures to control the spread of this first disease, which veterinarians have been conducting extensive campaigns to spray pens and pesticides in homes. Actions are sufficient, which ends the transfer chain by killing vector insects such as ticks.
He added, “The second measure falls on the shoulders of the Ministry of the Interior. Emphasizes that this is also one of the important reasons.
The health official called on housewives to “take precautionary measures by wearing footwear first and be careful not to injure the hand when handling meat, as it can spread to the hand wound from infected animals. Or by eye contact. “

Death registration
Last Friday, the first death was recorded after the emergence of four suspected cases of hemorrhagic fever in Babil Governorate (100 km south of Baghdad).
The southern province of The Car also reported high cases of the disease, which has so far led to the deaths of three people.
The World Health Organization (WHO) estimates that hemorrhagic fever is a viral disease transmitted to humans by poultry and livestock, with an estimated 40 percent mortality rate.
It is a local viral disease caused by the Crimean-Congo influenza virus, which is endemic not only in Iraq but also in the region in general, with limited cases being recorded annually for decades and leading to death.
The most affected are those who raise cattle, sheep and other livestock, as well as those who work in butcher shops (butchers). Contact with an animal after breeding, transportation, trade, or slaughter is highly contagious. “ 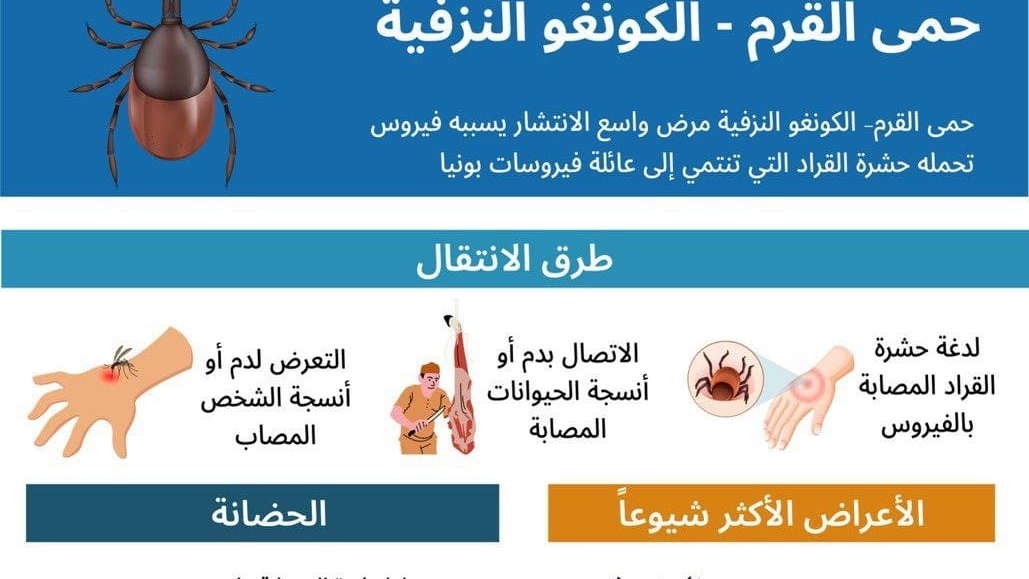 Spread of infection .. and no medicine

An official from the Iraqi Ministry of Health explained that “the most common mechanism for the spread of the disease is a vector, which is a tick that sticks to the skin of animals and spreads the disease.” By close contact with the patient or the patient’s instruments.

He stressed, “There is no vaccine for this disease in humans or animals …” and “the primary symptoms of the disease may be fever and occasional pain in the body, and abdominal pain may be recorded” … and “when the disease develops later, it can lead to kidney failure, liver failure, in the body. In addition to serious complications that can lead to dysfunction of many organs, bleeding can occur from body openings such as the eye, ear, or nose.

See also  Today a large asteroid will pass close to Earth without danger .. The details are known

The Ministry of Health recommends that public safety regulations, i.e. public health rules, especially the personal hygiene of livestock breeders, pay attention to the specific symptoms and review health institutions if they appear.